Megachurch Developers are met with Questions & Alarm Over 3-Year Construction Proposal Which Include Private Apartments for Church Leaders with Retractable Roofs, Private Roof Terraces and Balconies, Recording Studios, and Spas 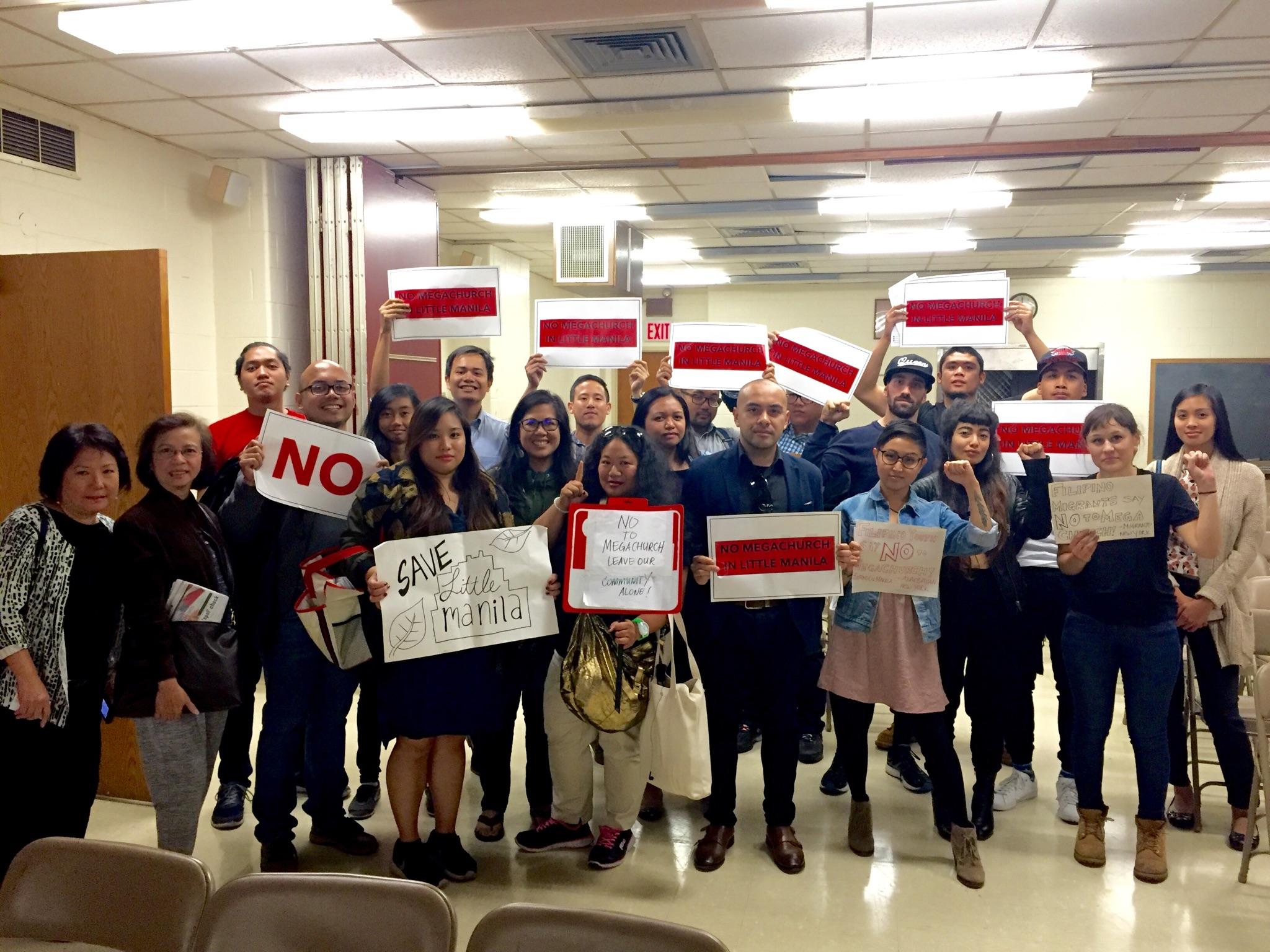 The community argued that the megachurch  threatens to inflict further out-of-context development at the corner of 69th Street and Woodside in what is already a chokepoint and a crossroads connecting the Brooklyn-Queens Expressway to Roosevelt Avenue and the communities of Sunnyside, Woodside, Jackson Heights, and Elmhurst.

While previous occupants of the church space have elected to expand in other industrial areas, the current owners of the facility intend to make Little Manila the American headquarters of their Brazilian Pentecostal Church. They are requesting special permission from the City to waive the rules so that the church is able to build an additional three stories higher in order to house a recording studio, private apartments for church leaders, and a spa.

Community leaders, organizations, and many long-time residents at the hearing fervently voiced serious concerns and outright opposition to the proposal. The projected three-year construction, in addition to being out of context and 30 feet taller than surrounding buildings, threatens to  generate short-term and long-term disruptions.  These are three years of revenue disruption that many small businesses would not survive intact.

If completed, the Woodside community would then have to deal with massive pressures on street parking as a result of the inadequate number of spaces promised by the development (only 150), as well as an 11-foot wall that will surround the development, shutting off the megachurch complex from the street and creating a “dead zone” that will be devoid of retail or street life especially late at night. Many groups urged the developers to sit down with the Community Board and local representatives from the immediate and surrounding community to negotiate an amicable solution and plan that works for everyone.

Brian Barnwell, winner of the 30th Assembly District Democratic Primary said: “I stand with the residents of Woodside to oppose this mega development in our community.  The proposed structure will have both immediate and long term negative consequences for the local community and its residents.  During and after the construction phrase, small businesses will face many struggles that will result in these long time businesses having to close.  This is unacceptable.  This mega structure will radically change the neighborhood and if the developer truly cares about the residents of Woodside, the developer would sit down with the community to work on improving this plan.”

Aries Dela Cruz, President, Filipino American Democratic Club of New York: “The megachurch developers were unprepared for the overwhelming community opposition to this project tonight. They characterized most of us as being from Manila, even though many of us were born here and have lived here for generations. They don’t recognize us or know who we are even though they claim they have been here for a long time and have served our community. The developers presented no meaningful plan to address our reasonable concerns that businesses would not survive the disruption to customer traffic as a result road closures from cranes, dumpsters, and other construction measures. They certainly didn’t address our concerns about the impact on street life that an 11 foot wall would have on these parcels of land. When faced with real community scrutiny, the megachurch developers failed to make the case as to why the community should support their request for special land use rights and permission to build this community-killer.”

Marian Guerra, Political Director, Filipino American Democratic Club of New York: “Tonight, we saw a glimpse of the kind of power the Filipino American community can build when we organize and make our presence known at spaces where decisions are often made without our input. We saw Fil-Ams of all ages speak about their personal connection to Little Manila, the impact of gentrification and displacement on local business owners and tenants, and the myriad of economic and social repercussions that the megachurch development would bring to the neighborhood. Tonight has proven that our civic voice is strongest when we’re united, and we will continue to strengthen our coalition for the upcoming general board meeting on November 3rd. As a safe haven for many Filipino New Yorkers, the fight to save Little Manila is one we all have a stake in.”

Steven Raga, New York Chair,  National Federation of Filipino American Associations (NaFFAA), and Woodside resident: “Tonight’s response by the community at the public hearing against this megachurch demonstrates that Little Manila has a pre-existing vibrant residential and commercial history and context that developers would do well to respect. This out-of-context development will only serve to accelerate the destruction of the cohesive and historic character of our neighborhood. I urge members of the Community Board to vote no on this plan and to act decisively in protecting the Filipino community’s home, refuge and safe haven.”

Chrissi Fabro, Anakbayan NY: “Woodside is home to 13,000 Filipinos – migrants, workers, and families. While we are concerned about the short-term effects of traffic, blocked light, and crowded sidewalks, we are even more concerned about the long-term effects. This construction will encourage developers to come in and raise the property value. The increased cost of rent will force the community to leave because they can’t afford it. But if the Filipino community comes together united, we can stop it.”

Stephanie Chrispin, President, UniPro – Pilipino American Unity for Progress: “The successes of Filipinx Americans are rooted in the deep appreciation and awareness of our community. The proposed development will fracture an important part of our identity as Filipino Americans by uprooting many who see Woodside as their home away from home. UniPro stands with the residents of Little Manila against the building of this church.”

Kenneth Chiu, President, NYC Asian-American Democratic Club: “The NYC Asian-American Democratic Club stands with the Filipino-American community in urging the City to reconsider the proposal for the megachurch project. Not only will the project result in adverse implications for the vitality of residential and commercial establishments, it can potentially affect the physical and psychological well-being of neighborhood residents. It is our hope that development projects like this can unify communities, not displace them. While the Asian-American community respects the good intentions of the church, the project may have the unintended and unjustified consequence of disrupting the social fabric that makes up the heart and soul of Little Manila.”

Berna Ellorin, Chair, BAYAN USA: “Development for whom and for what? Not for the community, especially working-class immigrant communities. The epidemic of displacement by big business and corporations across the US is now targeting Queens, and specifically Little Manila. The Filipino community and our immigrant sisters and brothers need to unite to defend what is ours, our home, from the corporate attack.”

Ed Santos, Community leader, former candidate for City Council and former Manhattan Community Board 11 member: “You can’t just build buildings and force it to fit the community. Like my community in East Harlem, we’ve seen haphazard developments and zoning negatively affecting our community’s culture and way of life. Before we start building, let’s build up the conversations with the surrounding community first.”

Dominique Liwanag, Migrante New York: “From a migrant perspective, this ‘megachurch’ is bad news. Rents will go up, local businesses closing down. Migrant families in Little Manila will be displaced and will be forced to look for cheaper alternatives. Unfortunately, those alternatives are far from the community we call home.”

Dan Raymond, Woodside resident and organizer, Queens Anti-Gentrification Project: “Aside from all the technical and infrastructural problems that will result from this project, we are particularly interested in the issue of exploitation. Simply put, this church preys on poor immigrants by literally selling them false hopes while church leaders get richer and richer. Edir Macedo, the church’s founder, has a net worth of over $1 billion dollars.  He is the majority owner of Brazil’s second largest television network.  In Brazil, the church has dealt with charges of money laundering and criminal conspiracy.  Macedo was accused of secretly diverting hundreds of millions of dollars of donations from the poor into private business for his own gain. This church preys on the same immigrant communities which are under threat of displacement from gentrification.  So, not only do we want to prevent this development, but we believe we should investigate and ask ourselves why we should even allow this exploitative organization to exist in the first place?”

Jackelyn Mariano, NY Committee for Human Rights in the Philippines (NYCHRP): “NYCHRP opposes the development because it would set a harmful precedent for future developers to build other projects that would negatively impact the vibrant Filipino – and other immigrant – communities in Woodside. Development that is unmindful of the actual needs of the surrounding community drives economic displacement by creating a market of higher commercial and residential leases that only wealthier business people and tenants can afford. Gentrification is a systemic erasure of historic communities, many of whom are composed of marginalized peoples who have found solace and safety in the enclaves they have created.”